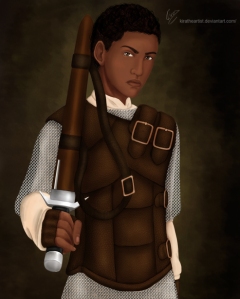 [Libra – October 15th.]
Hair: Dark Brown / Short and curly — Eye Color: Brown
Description: Derrek is average built young man, a testament to a balanced diet without a strict training regime.  He is of mixed heritage. To the average Gelban he appears to be a token Dendargian as they are a desert people similar to North Africans.

Development: When developing Derrek my primary goal was to find someone that served as an everyman from a typical American city.  Since America has developed into an amazingly diverse nation it only made sense to make him biracial. I also wanted him to serve as a bridge between the two nations mentioned in the first book, Geldbane and Dendarg. In Geldbane he is viewed as a foreigner, but would get similar treatment if he went to Dendarg. On a personal level I have endured some of what he has on a lesser extent being a light-skinned black myself.  While I’m not bi-racial, I had small difficulties fitting in on either end of the spectrum.

As far as his ‘power’, I wanted to drive home that Derrek is not a legendary hero. His is a case of being in the wrong place at the wrong time. His role as a Dimanagul is more of a nod to what our world has that Pange doesn’t. This is compounded with the irony that Derrek is unable to use magic where a small child in Geldbane can. The ability to cheat death is not something unique to him, but rather a result of being from our Earth and how we as a people interact with Pange and its Goddess. I don’t even try to hide this from the reader, but this is something Derrek has to sort out on his own.

The concept of someone enduring a ‘time loop’ is not a new one, but one of my annoyances with such plotlines is that death is cheapened. Death is a natural thing, sure, but it is something mortals only endure once. This is slightly different than an immortal who simply cannot die. Derrek is a mortal that can die many times. This has repercussions, and it is a lesson many before him have learned the hard way.  Many of them were simply driven to madness.  It’s a power with a cost.

Personality wise, it was important for me to use a subdued personality for Derrek. He isn’t a show-stealer like many main characters you might read about. Instead he finds himself relying on friends and what knowledge he has at his disposal. I decided to make him an Architect as a testament to the greatest compensation we have over people of Pange; our drive to create. Making Derrek a student in Architecture seemed to make him exactly what the world needed without making him an all-powerful hero.  He’s also not exactly innately heroic, but like many of us has a hard time turning a blind eye to wrongdoings.

It isn’t important that the Dimanagul is Derrek, but it is important that Derrek is a Dimanagul. If you’re like me and have read several fantasy stories and found yourself rolling your eyes when it is uncovered that the hero is the long lost son of some great hero, you should appreciate his role in the story. Hopefully you consider what you would do in his shoes, because that is what Dimanagul is really about.  Derrek isn’t the first, and he won’t be the last. These books are merely a collection of his memories.