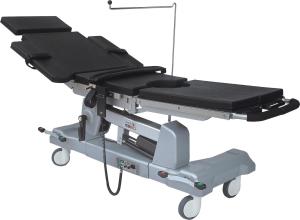 So fair warning.   Today’s story is not for the faint of heart.  Dread is a special type of anticipation that just makes our skin crawl.   Many stories scare us by the threat of death, but there are thing worse.   Far worse.

Remember though fiction is just that.   Do not try this at home.

“I just can’t decide,“ the doctor said as he held up two severed hands.   “Which of these would look good on you?   The dark skinned or the pale?”

His patient let out a sedated groan.  There was strip of cloth soaked in a pungent liquid across his mouth and his eyes.   He was fighting a losing battle to regain consciousness.

The doctor clacked his teeth once behind his mask, considered and nodded.   “Dark skinned it is.”

He tossed the hand left forsaken by the democratic process haphazardly behind him.   It landed in a pile of putrid flesh marked ‘waste’.   He had been working diligently on this one for about three days.   Not without rest of course; when he grew bored of the screams he did something else important.   He always had organ jars to organize.

His patient had been decidedly cooperative considering in a very short time he had all four of his limbs amputated, his eyes removed,   eighty percent of his jaw removed and reconstructed and several major organs removed, replaced, removed again, replaced with artificial organs, removed because said organs were made of vegetable matter, and replaced a third time.  The doctor was so sure that a hollowed out potato would make a fine stomach.   Live and learn.

The patient waved and drifted off into unconsciousness, much to the dismay of the doctor.   He wasn’t about to start replacing his hand if the patient was going to miss the whole thing.  He sighed and looked down at the dark skinned hand.  Memories filled his head when he was reminded of the donor that eagerly offered it.

He recalled clearly and fondly the scream of rage as he lashed out at the Doctor.  It took thirty three precision hacks at his wrist to liberate it from his arm.  He was still alive when it happened.   He was twitching at least.

The doctor had no great love for direct combat despite being good at it.   Living, healthy people moved predictably and held only a fraction of the interest of an eventual dissection.  Nothing quite matched the thrill of the random nature of blood vessels rupturing and playing guess work as to which way the blood would spray.  That was data he could get behind.

He paused from his elation to glance down at the patient.   The bound man had been still for some time, resting soundly.  “…Or he’s dead.   Shit.”

The doctor slammed the hand into the nearby operating table with force enough to shatter the bone in the wrist.   Living, intact, patients were so annoying to get and he had lost another one…

“Oh, right!” The doctor reached over to a long wire with a sparking node on its end.  He drove it into the shoulder of his patient.   Upon impact sparks erupted and scattered from the man’s body.   His head jolted up and a muffled scream filled the air.

“Not dead,” The doctor let the node swing back to its resting place.   “Oh science, how I love you, you never disappoint.”

The patient was even so kind as to regain consciousness.   He moaned again.   The doctor likely would have loved to hear his thoughts regarding dying and coming back, but he was likely not that talkative of a person.   Pleasantries were rather difficult when you didn’t have a tongue.

The doctor went to work immediately.   The most important step was connecting the nerves.   Pain was the greatest gift he could offer anyone, what good was having a new hand if you couldn’t feel it hurt.   He carefully stitched strands of flesh until the patient squirmed in pain.   The doctor narrowed his eyes at the man, likely he was suffering all sorts of pain, but it had to be from his hand.

The doctor squeezed the digits of the hand one by one looking for a reaction from the patient.   The room was somewhat silent other than thumping against one of the vats the lined the room.   That experiment was amusing as well.   ‘The effects of high grade acids on flesh,’ subject 332 had apparently  gotten another burst of energy.   The rest of the patients were asleep, unconscious or dead.   Mostly dead though.

The banging became grating as the doctor was getting no reaction to the gentle prodding.  He could feel frustration rise within him.  He narrowed his eyes at the patient and ripped away the arm angrily.   It undid all the progress he had made and the patient grunted.

“Oh you feel that one, why don’t you like my gifts?   Who do you think I’m doing this for?” The doctor shook the hand at him angrily.   The patient winced when the arm drew near him.   The displacement of air was enough to spook him beyond the shouting.  The crescendo of the banging noise in tandem with his mounting irritation of failure anger boiled within him.

The patient let out a small whimper with choking sobs to follow.   It made for a noisy duet that drowned out the delicious noises that brought him calm.

“Quiet,” the doctor pinched the cheeks of his patient firmly enough to cut his cheeks on his broken teeth.

The patient quieted but the banging went on, frantic and frenzied.

“I said… quiet!” With unwavering precision the Doctor flung the arm at the acid tank.   It made hard impact with a sickening crack and flopped to the ground.   The impact dislodged a steel door at the front and it swung lazily open.     The victim inside was haggard and desperate their legs had been left to ruin and was more bone than flesh grounded into single points at the bottom of the oversized bottle he was in… or she… the doctor couldn’t remember.

They continued to bang on the glass with futile urgency.   They were pleading.   He abandoned his patient again; they had lost consciousness again anyway.  Better that than dead, again.   He approached and folded his hands neatly behind his back.  His expression was hidden behind the white mask splattered with blood, other than his smiling blue eyes.

There were holes on the side of his head where his ears should have been.  There was not a scrap of hair to be found on his face.   It was apparent even under his medical cap, he was bald as a cue ball and nearly as pale.

The desperate creature in the tank pounded at the glass with fervor.   Their eyes were glazed over with blindness; a gentle mist gave the tell-tale signs that the acid needn’t make direct contact to do the damage.   The fumes had left patches of fallen hair and had already eaten away what little body fat they had left.  Lesions of blood burst all over their body.  They let out an endless scream, or perhaps their jaw had slackened from the acid and exposed their severed stump of a tongue.

The doctor admired his handy work, instantly set at ease from the supposed defiance.   These were the last moments of a grand experiment; one that ended in resounding success.

The glass section of the tank shifted and started to come free from its steel brace.  The doctor made an unconcerned step in retreat as the glass tipped forward.   The victim was in an oversized tube; a sturdy one.   It tipped forward, much to the surprise of the poor soul inside the acid had settled.  The shallow layer of acid leveled forward and started to devour the remnants of their lower legs.

The struggled harder and smashed their wasted palms against the glass.   The doctor responded with a casual back-step.   The tube was freed abruptly and it tipped forward crumpling the victim forward into the top of the glass tank.   The acid rushed forward bathing them from crown to chin in muddied grey liquid.  It was stained by the liquefied remains of their skin and bone.   They struggled only a short time before their already softened skin gave way and merged with the toxic substance; the twitching jostled the glass but did not free it.

With one calm hand the doctor reached down and tilted the glass into its original position.   He did so slowly, savoring the reveal of the acid’s work.   They had died quickly, an exclamation point in an extended sentence.

The remains of the victim quivered before collapsing into a gooey pile that slid along the edge of the glass.  It would only be a matter of minutes before the remains would be nothing more than slush.  The doctor gave one last shove snapping the glass back into its upright position and secured the steel door closed.

“How’s the study going?” A voice called out from behind him.

“I think the one on the table is dead,” the voice said.

“Boss is getting antsy.   You are close to finishing, aren’t you?”

“Yes.   Very close.” The doctor pulled off his mask revealing a row of perfect pearl white teeth and unprotected gums.  No lips to speak of rather than stitched flaps pulled across a skeletal grin.  His nose was merely two holes exposed to the air.  He turned towards the door and found the figure waiting there had taken  a step backward.

“My god…” the visitor covered his mouth.

“No.   He has nothing to do with this.” The doctor continued his eternal grin.  “Currently I am the only god here.”

3 thoughts on “Tidbits and Tales: Dread”