The character design is really unique. One of it’s better strengths.

So you have a root of understanding for this post, this past weekend I was able to spend some quality time on the beta for Guild Wars 2.  For those of you that don’t know; I’m a rather faithful player of World of Warcraft player.   And before you ask: For the Horde.

A great deal of the ‘best’ games out there are free roaming titles.   Examples include Grand Theft Auto, Skyrim, and Fallout.  Now I grew up on hub based games such as any platforming game released on the N64 or some of the PS2 titles that borrowed the formula.   Those games gave you the illusion of an open world without it actually being one.   And you know what?   I sort of preferred that.

Guild Wars 2 is an MMO at the basest form.   Some would call it an MMO light because it doesn’t have a few key items like organized raiding.  (This is actually a good thing)  The game is based on common courtesy, there is almost no reason to groan when you see another player.  They cannot steal quest items, resource nodes or a quest opportunity from you.   In fact it almost always is a good thing when you see other people.

You can revive a fellow player (and them you) by clicking on their smoking corpse.  You even get free experience for helping other people.   There is literally no reason to be a jerk in this game.  And for a game called Guild Wars there are no opposing factions.  Any PVP is World vs. World so you have to opt into it.  There is no Red versus Blue regarding everything.

That sort of makes me a sad panda.

Back to the main point of the article, this game has an interesting approach to questing.   Beyond your regular story quest, you don’t really pick up quests at all in this game.   You buzz around the world looking for people that need help.  It makes you feel like some sort of hobo looking for change, which is an appropriate analogy because like most early game stages of MMOs they do not like to give you much money.  I will say this at risk of a random Dovakin Fus-Ro-Dahing my face off, but this game is actually more open world than Skyrim but, BUT, it isn’t nearly as well presented.

The open world questing looks great on paper, especially since you’ll likely be wowed at how fun combat is in this game.   It feels crispy and responsive, more like a 3rd person beat-em-up than a MMO and has cool options like weapons changing your skill sets.  One of the first things that happens to you is an NPC will run up to you and accost you with a nearby quest available.   This happens all the time, except the NPC will be invisible most times.

Most of the static quests involve doing people favors and there are three or so ways to do so.   You can actually finish their quests without talking to them.   Sometimes you will kill a random wolf and the game will tell you that you just helped out a person and began to fill up an imaginary meter of how much they like you.  This is pretty standard MMO fare except you never get burned for not talking to an NPC before you kill something someone wants dead. 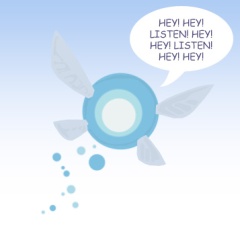 She’s there in spirit.

My only complaint with this system is that it is very hard to keep track of what you are doing when.  As mentioned before you have an invisible fairy all points bulletin buzzing in your head whenever an event of noteworthy is anywhere near you.  It puts a nifty circle on the map showing where this is, but they don’t offer the same courtesy for standard quests.  Sometimes you will be looking for the ten moose they expect you to kill and you’ll wander out of the ‘assistance zone’.  The events are repeatable and there are even large scale ones that are pretty epic.

Other players get the same alerts so it will frequently be a dog pile of players aiding with the objectives.  Because players can’t take items from you and things only appear ‘for you’ there isn’t a competitive feel amongst your fellow adventurers.  Couple this with the game making everything convenient as hell the game is engineered to not piss you off from a gameplay perspective.   Even without the easy res option from players they borrowed the Left 4 Dead ‘down’ mode that allows you to keep fighting to some extent even when you lose your entire HP pool.   You can Rally back even when you’re alone if something barely downs you.

Closest thing I could find to a “down” picture.   Those that play L4D understand.

Overall it’s a great idea and approach but this all seems really familiar.   The events repeat and there are times where you need to decide between one or the other.   They tend to blur together so you sometimes forsake one event for another only to find you’ve done that one before.   Sometimes events go bay really quickly and the thing you wanted to help kill dies really fast.   If I had to compare it to something, it reminds me of an Amusement Park.   Because of the sheer mass of players completing quests it feels like a theme park ride more than a fantasy adventure.  If you go by the story mode however you’d think you were the only adventurer alive… I have a similar criticism with Bioware’s latest MMO venture The Old Republic.  This sort of detracts the idea that you are but a part of a greater force for thwarting evil.

Wait! Stop the boat! I’m pretty sure someone asked me to axe the Gondola guy!

I have a feeling that Guild Wars will do fine, as it’s free to play after initial purchase.  It’s a great game with great features.   Including a lack of character name limitations I haven’t seen since Secret of Evermore for the SNES.  But it’s a good example of false freedom.  You are corralled into a routine and given the impression that it’s a revolutionary new method of story-telling.   It’s really not.   But it makes up for it by being very fun, visually pleasing, and lined with conveniences that many other MMOs wouldn’t dream of having.  It’s just in beta, but it was missing a few key MMO staples as well.   I noticed there was only about 5 emotes.   The Role-playing community is likely not happy about that. 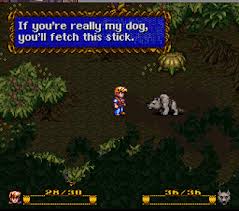 I named the dog “Antonio Banderes”. Because I could.

I thought this relevant to the blog because Guild Wars 2 does what a lot of popular media does.   They promise one thing and while they fell short of revolutionizing storytelling and the questing grind they certainly did several other things right.  It reminds me of how certain authors will aim for one sort of popularity and get something completely unrelated.  I certainly wouldn’t complain if the same happened to me.

Read our Mission. Find out how you can help us adopt James.