So a short while ago I mentioned “Layers of Defense”.   I figured now would be a great time to get a little bit more specific on this.

Ultimate Marvel 3 is heavy on strategy… light on realism.

The fighting game can serve as an analogy of human conflict.   Watered down perhaps, but a good analogy.   There’s a concept in these games called spacing.   Simply put, it is the ability to keep your opponent at a desirable distance from you to set up an attack.

Even on the scale of an general commanding an army, this is very important.   Range is key when you’re considering your combat capabilities against your opponent.

When dealing with the layers of defense, this spacing can mean how much leeway you have when you start to grow tired.   Both your ability to protect yourself, and how much time you have to react to an incoming strike.   It doesn’t really matter if you’re talking about a punch, or an well timed strike by a large group of soldiers.

When you stop thinking of the ‘health bar’ as ‘life’ and instead think of it as endurance it really amplifies the human element.

The game ‘Tekken’ while not my favorite franchise manages this well.   There are some exceptions like Yoshimitsu, but largely the game gives a strong impression of reasonable damage.   One the other end of the spectrum is Soul Calibur, which manages to completely cheapen what it means to get run through with a sword.

When it comes to fisticuffs, and the limiting of combat to simply that… the fighting game is spot on.   It’s when you introduce beams, swords and firearms that the disconnect happens.

I’d really like to see someone make this leap.   If someone could capture the art of sword fighting without breaking this wall of belief it would be a grand thing.    When I see it done well in fantasy and sci-fi it inspires me.

I mentioned Tomb Raider in my last post and how Lara ended up being the typical bullet cushion.   I think the game industry needs to take a page from the Matrix rather than slowing down time to be bad ass.   What should have been taken from that was the need to dodge.   Bullets don’t just hurt.   They’re fatal.   Taking a bullet means pain and debilitation.   Something Tomb Raider showed very well.

But isn’t that cheapened when two minutes later Lara dives into combat and gets grazed / hot a dozen times?   A little. 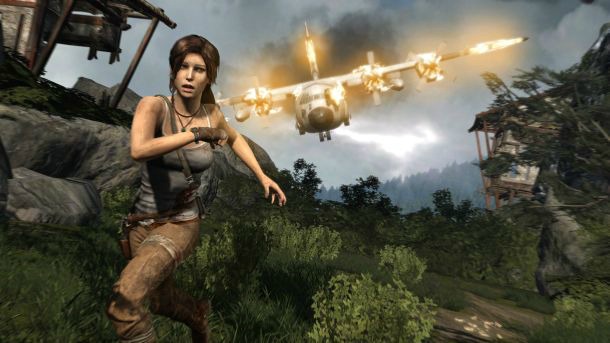 Why can’t the greying screen simply mean the hero’s fatigue (physical and mental) won’t be able to react to the next bullet fired?   I want a game that captures the severity of being shot without making the character less bad ass.   No one is going to fault a hero for DYING when they are shot.   Besides, some of the gritty death sequences in Tomb Raider are the greatest motivation to LIVE.