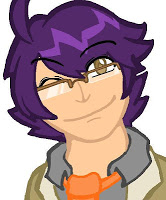 The all knowing eye of Lloyd.

So I’ve made really great progress in regards to editing the novel.   More than half way done and I plan to keep the pace rolling.   I’m not saying this is the last you’ll hear of this, but I’ll be going back to the usual programming for a while.

For now enjoy part 3 of my rendition of I Hraet You.

“I’m really sorry you had to see that.” Joyce said.   She eased Matt’s unconscious body onto the cot next to Lloyd’s.

“Not a problem.” Lloyd shrugged with one shoulder.  “If you don’t mind me asking, were you in a ladies league before you decided to become a doctor?  You seem to have a great talent for submission holds.”

“Ah.   No.” Joyce settled on the corner of Matt’s cot.  “It’s just something I picked up fairly recently.   I actually don’t condone violence.   But sometimes it can–”

Jay cleared his throat from his perch on the counter.

“Er.   Right, it can be applied for medicinal uses.” Joyce tightened her face into an uneasy smile.  “So, Lloyd, how does your head feel?”“Fine actually.” Lloyd rapped on his temple with his knuckles for good measure.   “The walls here are surprisingly good at dispersing impact.”

“Ah… you’re being an awful good sport about that.” She raised a hand to his brow and covered his eyes.  “Do you see any colored splotches?”

“Only a few.” He widened his grin.  “But seriously, it’s a regulation thing.   I think it can lessen the impact an eight hundred pound gorilla would dish out down to a measly three hundred pounds of pressure.”

“You sound like you’re talking from experience.” Joyce chuckled.

Joyce’s smile fell off her face.  She stood, walking over to the student files, and thumbed to the ‘H’ section.

“Next drawer down.” Lloyd raised a helpful hand.

Joyce blinked back at him, closed the drawer, and eyed the front of the drawer.

“Hoigleheimer.” She said aloud, swallowed, and pulled open the drawer.  She plucked one of the files at random and leafed through it.  She read in silence, until she settled her eyes on Lloyd.   “You were being serious.”

“Of course.” Lloyd wagged a finger.  “It would be rude to speak falsities to a woman, especially one as lovely as yourself.”

“You shouldn’t be able to live through punishment like this.” She rapped the file with the back of her hand.   This sort of thing tends to cause long term brain damage, dementia, and delusional thoughts.”

“Odd.   I haven’t endured any such things.” Lloyd rubbed his chin.

“I suppose I can let you get back to class then.  I’ll make sure Matt wakes up soon and send him soon after you.” Joyce pulled out a notepad and scribbled out a small message.   “If you feel dizzy or lightheaded, make sure you come back.”

“I wouldn’t worry about it.   I only seem to have those sensations around you.” He leaned forward with a wide smile.

“Right.” Joyce ripped off the note and held it out.  “Any of that.  Come back to the office.”

“So I should just disregard the current dizziness?  Or will that fade when I leave your radiant presence?” Lloyd stepped down from the cot.

“I suppose it couldn’t hurt.” Lloyd reached for her hand, but Jay swatted him away, the dark haired boy had stepped off his perch without notice.

“Don’t touch her.” Jay jabbed a finger at Lloyd, took the pass from Joyce and handed it to him.   “Trust me on this.”

“I had nothing but the purest of intentions.” Lloyd said, eying the letter.

Pass back to class.   Might be unstable and delusional.   No visible injuries.

“I can assure you though; my particular style is not a malady.” Lloyd pressed his lips together.  “I was only thinking of Dr. Jocelyn’s well-being.”

“My well-being?” She leaned closer.   “Sure we ran into each other, but you didn’t hurt me Lloyd.   I’m a pretty sturdy lady.”

“That’s not what he means…” Jay sighed.

“I could show you better than I can tell you.” Lloyd offered a hand.  “Just give me your hand, palm up please.”

“How bad could it be?” Joyce glanced over at Jay, her hand drifting towards Lloyd.  “He probably reads palms or something.   That sort of thing is quaint.”

“Not palms, hearts.”  Lloyd’s smile broadened.   “And it doesn’t always work as planned, but I’d be happy to see what it tells me about you.”

The environs of the Nurse’s office melted away, replaced with the familiar director’s chair and stage.  That went better than expected.  Now let’s see what we have to work with.  Lloyd leaned forward, folded his hands together, and called into the darkness of the room.

“So, Dr. Jocelyn, here we are.  I am ready and willing to aid you in any way possible.” He grinned.

Silence was his only answer.   The stage sat empty and the air stood eerily still.

“Err… well, that was the plan at least.” Lloyd drummed his fingers together.  “If not Jocelyn, then maybe someone else?”

“About time.” A spotlight appeared in the center of the stage.  Jocelyn stood in its center, wearing a skin tight bodysuit that left little to the imagination.  A thin length of purple fabric formed a mask across her eyes, clouding them to a dull grey.  She posed, arms flexed into a curl.

“So we’re doing this right?”   She eased to a casual stand, a hand resting at a hip.   “Or is standing around all day a part of the tryout?”

Lloyd gaped; the modest nurse outfit had nothing on her current choice of clothing.   It had the same color scheme, a deep purple highlighted with dazzling gold.  Every inch of her body had been covered, but at the same time so exposed.

“Oh right… the tryout.” Lloyd tugged at his collar.  “If you give me just a minute, I need to look at the script…”

The pile of papers landed heavily on the desk, offered by a man in a white mask.   His hair made sharp contrast in the low light of the audition room.   But… he shouldn’t be able to be here.   And who…?

“So this is what I picked up on.” The man said, folding his hands behind his back.

“More delays?   Really?   Do you want to do this or what?” Joyce leaned forward, annoyed.  The simple gesture strained her costume in all the right places.

“Ah!  We do!  We really do!” Lloyd stood up and leafed through the script with furious abandon.  He leaned forward, towards the stranger, and lowered his tone to a whisper.  “But who are you?   I usually don’t do this sort of thing with an assistant director.”

“Hm.” Lloyd turned his attention back to script.  “Lacks punch.  Have you considered a name change?   Mysterio?   Mr.  Mind?   The Amazing Mask?  I could suggest a few others.”

“Please stay close; I really don’t know what’s over there… “Lloyd knitted his brows at the script, hundreds of pages, but they were all blank.

“Just do what you were planning to do.   Just pretend I’m not here.”  And with that, Indifferent Boy vanished.

“Finally.   Does that mean we can get on with it?” Joyce let a small smile come to her face.

“Uh.  There is one thing.”  Lloyd closed the script.  The word Medic stood emblazoned in bold black letters.  “Is this you?   I guess I should call you Medic then?”

“Not really super strength.” Joyce shrugged one shoulder.  “But I’m pretty strong.   I can make the mind do things it typically can’t do.   You know the whole bit about, the human brain only uses a fraction of its potential?  That is what I can tap into.”

“Makes sense.”  Lloyd sat down and folded his hands together; a sly smile came to his face.  “So, I guess I’m as ready as I’ll ever be.”

“Good.”  A soft smile came to her face.   She raised her hands, resting them on the center of her chest, and thrust them outward.  “I’m counting on you Lloyd!   Make me a STAR!”