I had the random urge to write over the top action.   So here you are. 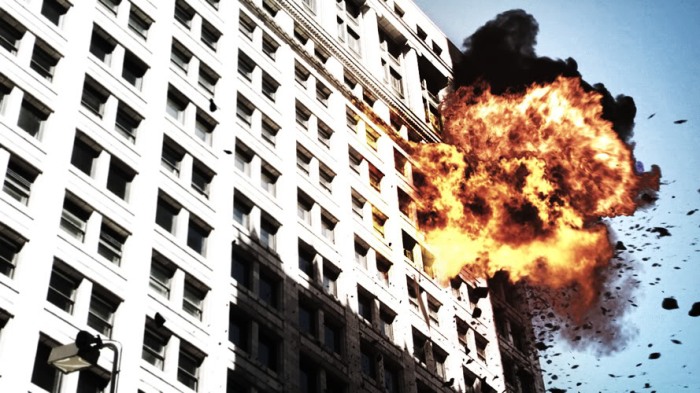 Barry Belgin dove through the window, sending bits of glass spewing into the room, and tucked into a tight roll.   A bullet grazed his boot on the second tumble, just in time for him to find protection from the couch.

He raised his lady, a .44 Magnum ready for action with the flip of the safety.  From the glance he got on entry, there were three guys.   He glanced down at the nick on his boot.   Packing pea shooters no less, I could probably catch this shit with my teeth.

He stood, lit up the man on the left in the break of fire, one clean shot to the skull.  His lady was on point today.   He could put a ruler to the guy’s skull and guess to the millimeter.   The second shot ripped through a table one of them used for cover.   Cheap IKEA crap was not made to stop bullets.   The third guy, Barry charged and holstered lady on his chest belt.   He draped a forearm at his neck and pulled his Bowie for inspiration.

“Hey there,” Barry said, grinning.   “Penny for your thoughts.”

“Ah…?” The man stared up through his visor helmet.

“That ain’t worth a penny,” Barry said, “You get face stabbings instead.”

The bowie  sunk through the visor in one thrust and started a red pool behind the goon’s head.   Barry stood, yanking free his knife, and cleaned it on a nearby loveseat.   There should be more talkative ones.   Short on time.

Barry slipped the knife into his belt and pushed into the hall of the hotel.   The security sucked outside of the little room, no cameras.   He must have picked the only manned room in the hall.   Barry knocked on the next door down with three quick smacks.

The door opened a minute later, revealing a guy in his boxers.   “This important?”

“Yeah.   You know which room the president is in?   I’d rather not have to kill everyone one at a time.” Barry said, smirking.

The guy looked him over, noting his green shirt with tattered sleeves, tastefully embroidered with a hand flipping the bird.   “You’re—“

“Wrong answer.” Barry said, punching him in the stomach.  The man slumped over and Barry caught him before he fell.   Two steps in; Barry dumped him in the open door to his bathroom.  No need to kill civvies.   Maybe there’s something in his room.

Barry pulled out a cigar, clipped it, and flicked the tip at the no smoking sign above the bed.  He pulled out a little Derringer pistol, pointed it to the ceiling and a tiny flame, and ignited the cigar’s tip.  He puffed it, scooped up the laptop near the bed and snapped it out of sleep.

A blue screen with PASSWORD lit up at Barry.

Barry eyed the sleeping twerp.  He wasn’t waking up anytime soon. So he puffed at his cigar, considered his options, and finally typed CRYTECH into the field.

Password accepted.   Barry smirked behind is stogie and closed out a video of a cat attacking a printer.    Underneath it, lines and lines of encrypted data.   But only one line interested him.

He’s not in this building.   Damn it.

While reaching to close the laptop, the screen rolled to a camera feed.  A figure cloaked in shadow began to speak in a thick English accent.   “You’re wasting your life Mr. Belgin.   You could be working for me, and yet you insist on flying solo.”

Barry narrowed his eyes.  “Throckmore Montebank.  Too scared to face me face to face?”

“Of course not.” Throckmore let out an irritating chuckle.  “I simply wanted you on the payroll.   You have this wonderful habit of cleaning up my messes for me with your juvenile demeanor and delightfully limited problem solving skills.   Are you smoking?  You know that hasn’t been allowed in Hotels for half a century.”

“There’s your answer.”  Barry pointed at the middle finger on his shirt.

“Charming.” Throckmore said, his tone turning droll.  “Well it has been fun.   But you really should leave that building.   As it is about to explode.”

“My.   Great minds think alike I suppose.   I have additional charges then.”

“What?” Barry leaned closer to the monitor.   “I put enough to level a city block.”

“As did I.   You should be doubly motivated to–”

Barry clapped the laptop shut, tucked it under his arm, and leapt through the window.  He should have had a half hour to work, but Throckmore wouldn’t give him that much time.    Now he was fifty floors up in free fall, and his rappelling equipment dangled uselessly near the entry window.  He pulled open the laptop to see Throckmore’s shadowy face.

“Make sure you get comfortable there, twerp.   Cause you’re gonna need a cozy seat when I finish kicking your ass.” Barry said.   Forty floors.

The building exploded behind him.   A storm of glass shards erupted above him and the ten floors above his entry wavered in the night sky of Chicago.  Barry pulled a hook and line from his belt and readied the firing mechanism.    Thirty floors.

Glass chased his fall, a wall of bladed shards that would skewer his broken body when he hit the street below.  He aimed, fired, and made contact with a statue decorating the building across the street.  Twenty floors.

He tossed the laptop over his shoulder, got a good grip on the line just in time for the rope to catch.  Barry wrenched out from under the wave of glass and flipped Throckmore a parting bird for good measure.

He twisted his swing wide, Kicking against the fifth floor or the building over and pushed into a run along it’s side.   Windows cracked under his boots when they made contact, but stayed intact.   He abandoned the rope at the second floor, leaned forward and broke into a sprint.   Impact with the sidewalk sent his legs throbbing, but he pushed forward to get under a cigar shop’s shops awning.   A bullet storm of glass peppered his surroundings, and the awning turned into a makeshift pincushion.

Barry glanced back at the cigarette shop, taking a draw from his cigar.  And they say this stuff will kill you.  The last of the glass fell to a trickle and Barry approached the smashed laptop.   Wide cracks erupted through the screen and it snapped at the hinge.  The occasional spark jumped from it.

“This isn’t over.” Throckmore’s voice said from the speaker in a garbled mess.

“Damn right it isn’t.” Barry said scooping up the wreckage.

Emergency sirens filled the air, and Barry pushed open the door to the shop.   The attendant watched him with wide eyes.

“Y…yeah.”  The attendant crouched down and pulled a cigar box from the counter.

Barry pulled out his wallet, tossed a pair of crumpled hundred-dollar bills on the counter.   “Keep the change.”

The attendant nodded as he tucked the box next to the smashed laptop.   Police cars, and an ambulance sped close, two police cars settled in front of the shop.  And four guns draw a bead on Barry when he came out.

“But down the weapon!”

“Piece is holstered champ.  2nd amendment.   Look it up.” Barry said with a shrug.  “These are stogies and my broken computer.   I was takin’ it to get fixed.”

“Hey.   That’s–” One of the police officers lowered his gun.   “I don’t think it’s a coincidence he’s here at the bombing.   We should bring him in.”

Barry walked towards them, casual and slow, and stepped in the back door of one of the cruisers.  He tossed the laptop and cigar box on the other seat and lounged like he would a taxi.   “Make it quick, alright?  I got a long day ahead of me tomorrow.”

Error: Twitter did not respond. Please wait a few minutes and refresh this page.

Read our Mission. Find out how you can help us adopt James.