Ok, serious talk here. I don’t feel like I’m being a hypocrite when I expect consistency in Fantasy.  Have you ever watched a movie and raised a Picard flavored hand and said:  “Oh, come on.”

That’s what I’m looking for.

Seriously? How does that guy still have his face?

Fantasy is, well, fantastic.   However, you can still maintain a sense of realism in your world by establishing what can and cannot be done.   I’ve mentioned this is previous posts, but I’m not a fan of the presentation of healing magic in fantasy.   It often ends up being a cop-out.  The instant someone in a white robe can wave their hands and knit a fatal wound, it cheapens mortality.

Hypocrite!   I hear you say.   You, who write a story about defying death, have no place to criticize healing magic.   My answer to this is simple.   Healing is fine if it has a cost.  It’s all about equivalent exchange.  This is where reality enriches fantasy, rather than oppresses it.   The great part about fantasy is your ability to make stuff up.   It is up to you to make your reader accept the reality.

One of the biggest “Oh, Come on!” moments I get is combat.   One can easily perceive A hero who avoids injury as weak because they don’t ‘endure’ any hardship, but I groan when a hero takes a fatal wound and ‘walks it off’.   Some stories and media are passable about this and make it a point to incapacitate the hero for a realistic amount of time after said wound.   More often than not, a day of rest and they’re fighting bad guys with some bandages.

Sword fighting is a grisly business.  You’d be surprised to see what can lead to a fatal strike.  I’m not seeking biologically perfect strikes, goodness knows I’m not in my writing, but rather to save the really bad stuff for moments when you actually plan to kill a character or permanently debilitate them. 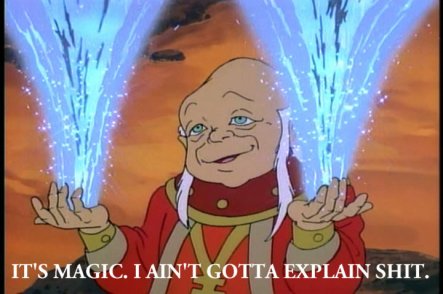 On magic, the subject at hand is a bit touchier.   You can have magic do anything, but the more you have it do the more you have to potentially justify.   Consider this, if magic can restore a decapitated head with the snap of a finger it would inevitably lessen the threat of getting your head cut off.  Sure, it hurts.  Sure, you die.   But what if neither of those two things means anything?  Giving a clear disadvantage to the magic gives it substance.   Would you think twice about using a spell to de-decapitate your friend if it meant losing your own head?   You betcha.  What if every wave of the magical healing stick took a year off your life?   You’d be pretty mad at people bemoaning over a paper cut.

Realism in Fantasy is about getting your reader to suspend their disbelief.   If you spend a whole story conforming to realism, the reader will come to expect realism.   If Faries, Elves and Dragons show up in chapter one, they’ll realize:  “Oh, this isn’t our world.”  If you establish early on there is healing, but demonstrate a case where it doesn’t work (or start with the disappointment) it reminds the reader healing isn’t a cure-all.  Even in a world where magic can mend wounds there is still plenty of disappointment.   This brings it closer to how modern medicine works.

Keep in mind, this does not mean you should have someone explain your magic to a layman so the reader gets why ‘Nanoblurks’ hold up the world.  Instead you can demonstrate places where a lack of ‘Nanoblurks’ causes destruction.  This goes to the classic argument of “Show, Don’t Tell”.