So after my inevitable victory of the Dragon Lord I decided to keep the classic RPG ball rolling since Square-Enix see fit to put games on the Google Play store.  There’s been one glaring hole in my classic Final Fantasy agenda for a while now and that’s Final Fantasy 2.

No, not the one with Cecil the Dark Knight and his quest for rainbow colored hair.  I mean the NES game that never came stateside until the age of Playstation.  Firion, the main character, STARTS the game with rainbow hair so there may be some correlation.

The thing is, I hated this game when I first played it.  The leveling system is obnoxious.  However, I may not have been very fair to it.  Final Fantasy 2 is ahead of its in its ability to customize.  When I say customize I say you can defy the archetypes.

When the game starts you get a standard Rebels vs. Empire scenario.  Your band of four adventurers just got their parents murder-faced by the Empire (cause it’s evil, duh) and you are thrown into a battle.  You have a sword and shield guy (Firion) a big guy with an axe(named Guy), and a bow toting lady (Maria).  There’s a forth friend but before I can get to know him, the enemies in the battle smear my 30 hp characters with 600 damage attacks.  “Your party has been defeated.” 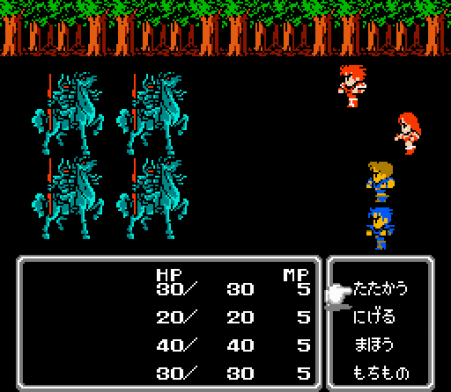 It’s such buzz kill to get one-shotted on the first battle of a game.

I really hate losing the first fight in a game.  Scripted battles are my bane.

Anyway, some rebels come along with a holy spatula, scraping your smear stains off the battlefield and take you back to HQ.

Now here’s the thing.  They tell you NOT to join the resistance even though you’re a wide eyed band of ragtag adventurers.  They point you to the quest anyway and drop passive aggressive hints that they expect you to stop the war.  WILD… ROSE… 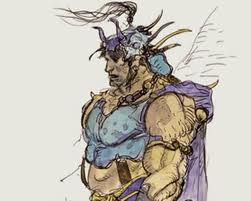 We’re getting to my favorite part of the game here.  A part I HATED when I first started playing it a decade ago.  There’s no experience points.  When I won a battle, Firion got better with his sword, Guy with axe-hackery and Maria got slightly less crappy with her bow.  (Bows. Are.  Terrible.  In.  Final.  Fantasy.)  Maria’s HP is JUNK and if the game has its way she’d be a back row squishy bow shooter / healer.  Realizing this, I smacked that bow out of Maria’s hands and told her to suck it up and start punching stuff.

Sure enough, Maria started to do double the damage of Guy in no time (even after I gave him a second axe.)  I let Firion keep up with his sword and shield since rainbow hair obligates you to be goody-goody paladin in my eyes (if it ain’t broke).  With Maria punching out goblins with finesse, Guy took to healing and melting things with spells.  It makes me giggle when Guy (who talks in caveman speak) gets the most Intelligence boosts of any other character.  Honestly?  I prefer my healer to be a damage sponge so they’re the last ones standing in crisis.  Squishy characters should be dealing out damage.

The key point is this.  Fantasy likes falling into archetypes when it comes to characters and this is OK, but sometimes we need to challenge the reason why we embrace these archetypes.  Is it because it’s a good idea?  Or is it because it’s expected?  I’ll let you guys know how punching Maria does in the mid game.

2 thoughts on “Musing: Defying the Archetype”