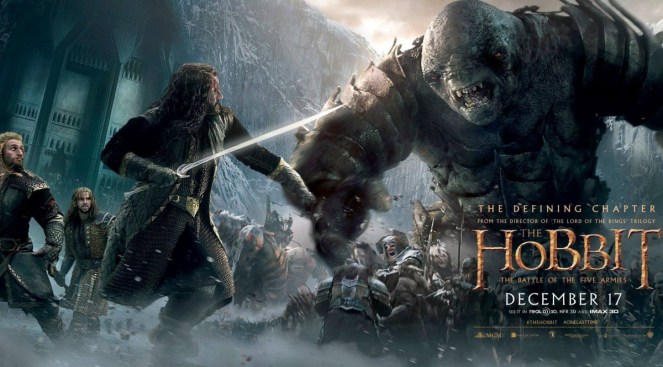 Let it be known I was one of the people who groaned at the announcement of the Hobbit’s three-part movie set up.  Now that the third movie is in the books, I feel appeased.  I couldn’t help but notice the ‘Universal Studios ride’ feel of the first two movies.  I’m fine with that too, considering it struck a familiar chord of eighties fantasy movies like ‘Willow’.

The main reason I liked Hobbit Battle of Five Armies?  It got me interested in the Lord of the Rings.  Like any good prequel, it set the stage.  Sadly, though, this meant Bilbo Baggins took a serious backseat to most of the story.  I guess that makes sense, the burglar Hobbit is overshadowed by much larger figures.

I have to step on a soapbox for a second here.  This bridges into my point from last week.  There are grumblings about a certain interspecies romance in this and the second movie.  It’s completely ridiculous to make a big deal about it.  Allow me to explain.

Tolkien is well known for his sprawling world and the epic scale of Middle Earth.  He’s NOT known for his character depth and diversity.  A common issue with the movie industry is their desire to make stories accessible to the masses.  No one should be surprised this isn’t a niche movie for Fantasy nerds.  The less than five minutes of screen time that said romance occupies is greatly eclipsed by another glaring improvisation.

This guy.  That unibrow.

This guy.  What does he add to the story?  He fills to ‘social antagonist’ role oh so popular in American media.  He’s basically the movie’s Biff Tanner, or for Power Ranger aficionados “Skull” of “Bulk and Skull” fame.  He’s there for cheap laughs and to give Baird more excuses to be on screen.  Amusingly, he got more screen time than many of the major and relevant lore figures.

The offending romance on the other hand challenges the notion that elves and dwarves are mortal enemies.  (Or at least they don’t like each other much)  Does it though?  If you put two people from warring countries in the same room do they unconditionally fight?

In her defense, Thorin’s bloodline are the ‘Fabios’ of the dwarves.

Let’s take this slow.  Elves and Dwarves don’t get along because they’ve historically clashed.  This makes it so their respective kin teach their children the other can’t be trusted.  This is a form of prejudice.  All it takes for a friendship (like Legolas and Gimli) to brew is basis for trust.  In the Hobbit, romance builds on a volatile combination of a few factors.

What is the problem?  If anything, it’s fishing for something Tolkien could have considered.  Exceptions to the Dwarf-Elf hatred.  This is the Hobbit’s equivalent of the Legolas / Gimli bromance only with a little more ogling. 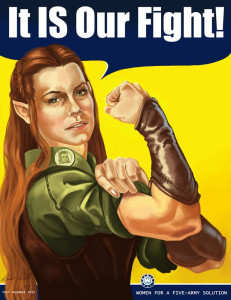 Tauriel looks good in this movie, and not because she’s batting her eyelashes.

To be fair, it’s disappointing they had to add a badass elf chick (because she wasn’t there before) but if it means fleshing out the flat rhyming name dwarf brigade, I’m all for this.  I find it just as important as when a fellow dwarf told off Thorin Oakenshield when the dragon fever turned him into a raving jerk-face.

Complaining about the romance in BoFA is sort of ridiculous.  The movie needed more stuff like that.  I would have loved to have a measly five to ten minutes added to the movie to show the characters were living people rather than cardboard cut outs.  If I don’t care about the characters, it’s hard to be upset over their fate.

Anyway.  I enjoyed the movie and I suggest watching it even if you aren’t a Tolkien buff.  You might even be better off than Tolkien buffs.  I downplayed Bilbo, but he still makes some crucial choices despite his powerlessness, but I can’t help wonder if the movie is misnamed.  Perhaps it should be changed to the “Battle of Five Armies with a Hobbit occasionally appearing here and there.” 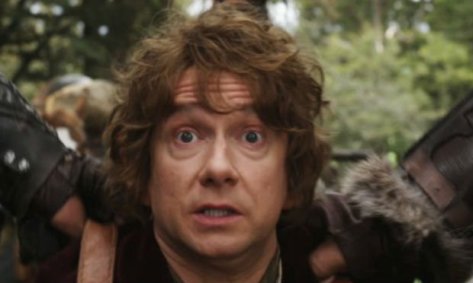