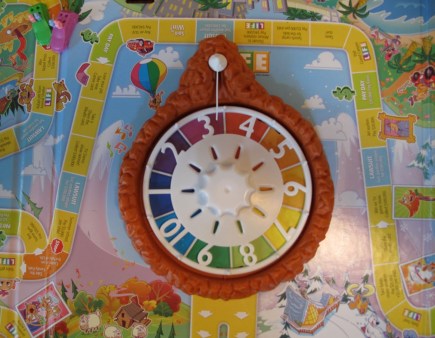 Sometimes all you can do is spin and pray.

Sorry for the delay on this week’s story.  Occasionally I get bursts of motivation to work on other projects.   I won’t leave you guys hanging long though. (If I don’t post on Friday, you’ll get a B.O.S.S. by Monday– promise.)

As I said before, 2015 will be a mostly fantasy year, but I won’t deny the call for the occasional Sci-Fi or Zombie apocalypse.   Here’s a Jeff equivalent of Harriet’s Side story a few weeks ago.  Try not to be too hard on the guy.   He’s not natural hero material.

EDIT: I forgot the Walking Dead starts again today.  So I guess that’s why I have zombies on the brain.

This short story (like all of the Game of Life Stories) has violence and mature content.   Be warned.

Game of Life Side Story:  Jeff

Jeff washed his hands for the fourth time– the blood wouldn’t come off.

His mind raced, urging him towards crazier and crazier things.   Call the police.  Run away.  Dispose of the body.

He looked over at the tub, where he had stashed the thing that used to be his girlfriend.   The drawn curtain spared him from impetuous glances, but it only covered the truth.   He killed her.   He was a murderer.

Jeff’s stomach churned, held down by having nothing left inside and a stronger desire to avoid the tub.

None of this would have happened if he’d told her no.   He didn’t even want company over.   Now everything had gone to shit.

A knock at the front door of his apartment made him jump.   His heart skipped a beat.

“Hello?   Is anyone alive in there?” said a woman’s voice.

Alive?  What a weird choice of words.  He clapped his hands over his mouth, suppressing the urge to call out.

Footsteps padded from the hall and she called again a second time, fainter this time.

Jeff hurried through his main hall, unlatched the deadbolt and the chain and cracked open the door.  The woman screamed.

A man lunged at her, pinning her against the opposite wall.  Jeff knew the guy, Barry, an obnoxious gym rat– mostly harmless outside of being a jerk.

Then he bit her, right on the neck like a goddamned vampire in a late night movie.

Jeff gaped through the crack in the door.  The woman screamed for help, calling for anyone.  Jeff closed his door and locked it tight.  He slid to the ground and covered his ears, trying to drown out the cries for help.

What could I do?  Barry would just punch me in the face.   I can’t do anything.   I’m helpless.

The screaming stopped and footsteps crept down the hall, slow and deliberate.

Barry was coming for him next.

Jeff fled from the door and stopped at the hall between his bedroom and his bathroom.   His bathroom door could lock but the door was flimsy.   His bedroom door lay ajar, still carrying the stink of Fabreeze and a faint odor of blood.  He swallowed back a lump in his throat and recovered the murder weapon– a five hundred dollar ‘authentic’ katana.

It was either that or the cricket bat.

Jeff grabbed the corner of his sheet and wiped away the blood.   He scooped up a backpack he hadn’t used since he dropped out of college and stuffed two sets of clothes inside.   He grabbed the little oil treatment kit he got with the sword and his Nintendo 3DS.  Priorities.

The first knock stunned him.   It hadn’t been the frantic please for help the woman had done, rather a accusatory slam, followed by another.

He’s trying to break down the door?

A third slam lighter than the first, set him on edge.   Soon it became a duet.   Two people were knocking on the door.  Jeff tuned it out, struggling to open the window instead.   He wasn’t even sure if the fire escape could hold up a cat let alone a person– but he had to try.

The window didn’t cooperate.   He hadn’t cracked open the window in years.  Rusted guiding rails jammed and didn’t let it lift an inch.

The slamming got louder.  A third set of hands added to the chorus.

Jeff yanked at the little metal finger hold on the window.   They snapped, flinging him backwards on the bloody bed.   “No!”

His voice strengthened the resolve of the people outside.  They smashed against the door enough to jostle it out of place.

Jeff panicked.  What I wouldn’t give for a crowbar.  The thought drove his situation home.  “Zombies?”

It all made sense how.  He put a hand over the bandaged spot on his shoulder.  Jill had bit him there.  He didn’t feel sick, or angry.   An odd sort of relief came to him instead, alongside a crippling sense of guilt.

I didn’t help that woman.   And because of me she–

The door crashed off its hinges.   Barry and the woman pushed through with three other people behind them.   Jeff was out of time.

He turned and slammed his foot into the window, bouncing away from it uselessly.  Jeff flinched at the surge of pain through his leg.  “TV makes that look so easy.”

Jeff turned, brandishing the sword– trying to remember something, anything from the last samurai flick he watched.   He drove the blade forward, landing clean in the center of Barry’s chest.

It didn’t stop him.

Instead he barreled on, roaring in guttural rage.

Jeff sidestepped, forced to abandon his sword and left Barry to slam head first into the window, shattering it.

The woman behind him let out a shrill screech and lunged at him.   Jeff caught her at the wrists and struggled to hold her back.   She was stronger than she looked.  “You bastard.   You didn’t help me!”

“Sorry.” Jeff said, flinching and shoved her away.   He dove towards his closet and got plan B– the cricket bat.  The woman stood and lunged again.   He swung it baseball bat style and clubbed her across the face, sending her reeling and knocking back the three other invaders.

Barry pulled himself from the window, growling.  Bits of glass stuck to his neck and shoulders.   The sword still jutted from his chest.

“OK.   Plan C,” Jeff said. He smashed the cricket bat into Barry’s face and recovered the sword with one good tug.   Gore spilled onto the bed, making it slick and dangerous.

Barry’s struggling left the window fairly clear, but a strange sense of empowerment came over Jeff.   He swung his sword hard and slammed it into the side of Barry’s head– straight from ‘Zombieapocalyptic’.  The burly man folded, halted by the destruction of his brain.

She righted herself and charged.   He kneecapped her with a quick left handed swat of the cricket bat and drove the blade into the center of her forehead.   He pulled back his blade, ready for more.

And there would be more.   Much, much more.