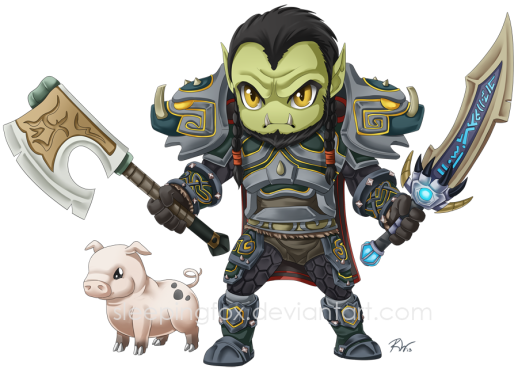 Here’s a new chapter for Rage of the Cursed.  –enjoy!

Rage of the Cursed Part 9

Xallion caught back up to Tieshaie after settling the tab.  The meal cost him most of his petty coin.  He’d have to live slim for the next week.

Tieshaie grabbed him by the arm and gave him a playful squeeze.  “I think I can call us even now.”

“Good,” Xallion said, pocketing his coin purse.  “I thought I’d be washing dishes for a moment there.”

“I was thinking, since you seem like a decent guy I’ll help you a bit more.  I know some people that might have some clues on our mystery man.”

“Then I’ll stay out of your way.  I’d just scare them off.”  The dogs always flee in the presence of a wolf.

“Tell you what, I’ll be back at my place by sundown.  Meet up with me there and I’ll have a surprise for you.  Don’t leave me waiting.”

“Looking forward to it,” he said.

She vanished into the city crowds and the forced smile left his face.  He’d seen people like Tieshaie countless times, good people pushed to bad things by people close to them.   She was a good person, Xallion could smell her confidence and the shift in her mood when spoke of her brother.

The people associated with her brother could bring him to the man who killed Ane.

Just thinking about it raised the hairs on the back of his neck.  It had been weeks since he fed—no rare steak would slake that hunger.

He went the opposite direction, towards the city guard.  He hoped they had information on Tieshaie’s brother.

A uneasy feeling seized Xallion, the people around him shifted about like a pack of startled sheep.  He glanced over his shoulder, catching a glimpse of naked steel.  Xallion caught the attacker by the wrist.  The point of the dagger dug into his neck.

Xallion roared, flinging aside the attacker into a gathering of people, they toppled into a chaotic heap.  He flinched against the shallow wound and pressed against it.   The attacker scrambled to his feet and the bystanders fled in all directions.  His assailant wore a cloth mask, etched with a familiar eye on the center of his forehead.

Anyone could recognize it as a life eye, but it lacked a pupil.  A blind life eye

Xallion drew his sword, but a pang of numbness shot through his body.  His grip on his blade faltered and it fell free to the ground.

“We know how to deal with rabid dogs,” the man said, pointing his dagger.  “The Unseen Eye will cleanse the scum from this world!”

“Great, a cultist,” Xallion said, muttering.  “Just what the world needs more of.”

“Silence non-believer!  Your veins will burn with righteous fire.”

Xallion straightened.  He kept his rage on a low boil.  “You picked the wrong guy to poison.”

The cultist chuckled.  “We are well aware of your cursed blood.  We have no intention on killing you.”

Something felt wrong.  Xallion’s anger wouldn’t recede.  The poison fueled it, empowering it and gave it a target.  He couldn’t give into his anger in the middle of town.  The inhabitants would fear him, and worse, people would die.

“Show the people what the Unseen already knows,” the Cultist said.   “Let your rage burn brightly.”

Xallion fell to one knee.  The scent of his own blood overwhelmed him.  He wanted nothing more than spill more of it and feast.  His stomach growled, demanding flesh.  He wouldn’t hold much longer.

A blurry figure broke from the crowds, dashing towards his assailant.  They moved quickly and light footed, leapt into the air and drop-kicked the cultist in the back of their head.  He pitched forward, slamming face first onto the gravel road—out cold.

His savior landed gracefully, bouncing back and forth in a showy fighting stance before approaching him in a familiar stride.  Tieshaie reached out to him, smiling.  “I see you met my ‘friend’.

Xallion slapped away her hand.  “Your friend tried to kill me.”

“He’s not actually my friend, moron.  I mean I saw him following us.  I split up with you to see which of us he was after.  I’m a little disappointed he followed you, maybe he thought you were cute.”

“Oh, and here I was thinking you were something more than the typical man.”  She spoke in a gruff, growly tone, mocking his voice.  “Oh, no body could sneak up on me.  I’m a super ranger man.”

She flicked his nose.  “He snuck up on you and you got stabbed for it.”

His irritation peaked and now Tieshaie was the only outlet for his rage.   He stood, stumbling backwards.  “You need to leave me alone.   It’s not safe.”

“I’ve been poisoned, if I lose my temper I’ll—”

“Oh, so that’s all you’re worried about?  Come here a sec.”  She closed the gap quickly grabbing him by the shoulders and pulled him face first between her breasts.  “Hard to be mad now, right?”

Xallion froze, and embarrassment over took any rage welling inside of him.  He struggled to get free, but the secondary effects of the poison sapped away his strength.  On top of that Tieshaie was surprisingly strong.  He surrendered to her embrace.

His whole body relaxed and he fell back to his knees.  Tieshaie ran a hand through his hair.  “There’s a good boy.  You don’t feel so angry now do you?”

“Please stop that,” Xallion said, lowering his voice.  “I mean… I appreciate you helping, but this is a bit much.”

Xallion pulled away from her, blushing deep red.  Sure enough, a gathered crowd had formed.  Tieshaie put a hand at her hip, smiling coyly at him.

Guards broke through the crowds and looked down to the unconscious cultist.

Tieshaie said, holding her hands.  “Any bounties can go to yours truly.”

The guards exchanged uneasy looks and approached with a pair of shackles.  They snapped them around Tieshaie’s wrists.

A second guard shoved her.  “You can explain back at the prison, you’re a wanted lady after all.”

“Hold,” Xallion said, pausing to retrieve his sword.  “On what grounds.”

“Assault,” the first guard said pointing to the fallen cultist.

“That main attacked me,” Xallion said.  “She was just defending me.”

“Defending you?” The guard said, smirking.  “You look capable enough.  Looks like she was just looking for an excuse.  Besides, I have people telling me this man was a friend of hers.”

“It was sarcasm,” Tieshaie said.  “Seriously, I saw this guy tailing us for the last hour.   I—”

“Premediated assault is even worse, lady.”

Xallion sheathed his blade and held out his hands.  “If you’re arresting her, you’ll have to do the same to me.  I asked her to work beside me, any action she took is my responsibility.”

“Oh don’t worry, Mr. Xallion,” the guard said.  “We planned on taking you in too.  After all we have witnesses saying you’ve been fraternizing with this known criminal today.  We got a tip from a café waiter.  He even says you threatened to kill him on her behalf.”

Xallion groaned.  Me and my big mouth.  “Fine, but you are wasting your time and interfering with an investigation head by the Ki-Leinah high council.  This won’t be taken lightly.  We’ll overlook this only if you unhand Tieshaie.  I’m your man, not her.”

Tieshaie glanced over at him with a coy smile.

“You and I both know there’s nothing against Ms. Areinare and you’ll only be paying reparations for it.  Let her go.”

“Fine,” the captain said.  He unlocked the shackles and shooed her with a flick of his neck.

Tieshaie wasted no time getting to a safe distance.  “Offer still stands Xal.”

Xallion nodded to her and she vanished into the crowds.

The guard captain settled in front of Xallion, snapping the shackles around his wrists.  “Looks like we’re going to have a nice little chat, hope you’re ready for your cage– wolfman.”