There’s been a recent stink about the Suicide Squad movie (an upcoming  D.C. comics movie) on several angles.  Some of them I completely agree with– like the glimpse of ‘Hot Topic’ Joker.  Others I cautiously disagree with—like he debacle over Harley Quinn.

On paper the argument is completely legitimate.  No one likes it when characters are over sexualized and cheapened, but some people (non-comic book people) took her jacket out of context.

Property of Joker isn’t a devaluation of Harleen as a character, it is a testament to her madness.  Let’s take a moment to go back to her roots, the Animated Series of Batman.

It’s pretty amazing that Harleen Quinzel was initially a T.V. only character and turned into one of D.C.’s most popular villainesses.  There’s a good reason for this.   Ms. Quinzel is introduced as many of Batman’s villains are:  A brilliant person with quirks.

She was the model of success and stability, a young psychiatric intern with aspirations of studying the twisted minds in Arkham Asylum.   We all know what individual she had her sights on in particular.

After three months of badgering the authorities in Arkham, they let her have sessions with the Joker.  This isn’t a case of a weak female character bending to the whims of a male, this is the case of a strong, weird, female character taking what she wants. 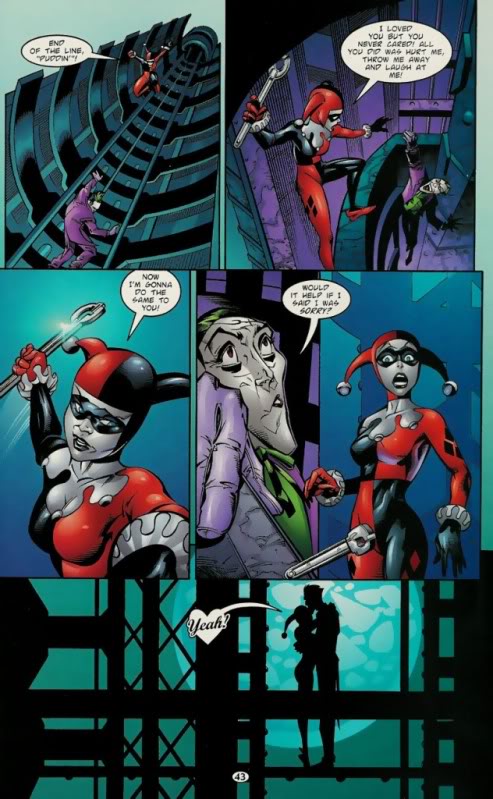 Insincere or not, it is no small achievement to pull this from one of the most ruthless criminals in history.

Best believe the clown prince of crime would jump at the opportunity of corrupting someone stupid enough to try and ‘cure’ his madness.  However, it is more that Harley found his madness as a beautiful thing.  Her love for him comes from extreme professional curiosity.  She doesn’t see his madness as malady, she sees it as art.

Joker never seduced Harley.  He instead accepted her as a protégé.  She is ‘Mr. J’s’ equivalent to Robin– albeit one with some romantic tension.

Like any good shrink, Harley’s continuous exposure has a lasting effect on him.  He starts to harbor feeling for her and it scares the crap out of him.  When he sees this ‘weakness’ as a threat he tries to kill her, but Harley Quinn is not a stupid woman.  She picks apart his scheme and puts her foot down.

It’s easy to label her as a victim of an abusive relationship, but it’s better to say she’s in a mutual sadistic arrangement.  Unlike Joker’s other thugs, she’s there because she wants to be.  So, going back to that jacket for a second?  That’s Harley’s way of saying “Use me as you see fit, Mr. J.”

For those interested here is a nice breakdown of her ups and downs.