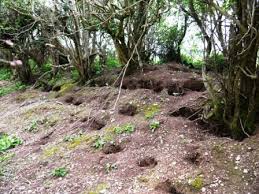 When writing a novel there’s nothing sadder than parts that don’t see the light of day.  However, sometimes you just have parts that just don’t fit into te big picture.  After finishing the last chapter of Kingless Country, I’ve taken some quality time looking over the scraps.   Some discarded chapters have good ideas in them, they show sides of characters that usually wouldn’t come to light.

Sometimes it hurts to admit a chapter only exists because I, the author, want the reader to see something or know something.   While this delivery or information has the potential to be interesting, it destroys the integrity of the story.   The characters lose their will and become my puppets– this smashes the fourth wall in my eyes.

I’ve lost many chapters this way– but it makes the story better in the long run.   I keep the scrapped sections, though, as it comes in handy in a ‘what if’ scenario.   If I struggle to write a part that feels ‘natural’ for the characters I can refer back to these scrapped sections and draw motivations.  Just because the motivation of the ‘scene’ isn’t natural, doesn’t mean the characters aren’t responding appropriately.

Some of these ‘Lost Chapters’ involve alternate situations.   It almost feels like a ‘choose your own adventure’ at times where one path goes off to an alternate ending.   It makes me wonder and consider side projects like:  How would this have played out if X happens to Y rather than Z.   The options are endless.

The trick to finishing projects involves shelving such things and holding on to them.   Chasing down every rabbit hole is the same as falling into an endless World Building loop.

I look forward to a time when Kingless Country is published so I can release chapters like this as added treats to those that enjoy the book.   A guy can dream, huh?