For those of you that have read the blog since the start, you probably know I like fighting games.  One of my qualms with the genre comes from inconsistent tone with the source material.  In short, I think if a game looks realistic, it should feel equally realistic.

Graphics are improving in today’s age, but there are still strange disconnects between the mortality of the character.  I’ll use the gritty turn of the Tomb Raider franchise as an example, Lara treats a wound from a piece of steel puncturing her flesh, but then not ten minutes later she shrugs off bullet wounds like a champ.

People will say ‘it’s just a video game’ but I really don’t think that’s an excuse.  The same goes for writing a book.  Suspension of disbelief is crucial in fantasy.  I’ve mentioned in past posts the ‘Oh, come on!’ factor.  You still need to preserve the realism of the medium.

I’m pretty sure if someone got hit like this, the fight would be over. Just saying.

Let’s take Mortal Kombat for example, in the recent incarnations they introduced something called X-Rays.  In these key bodily functions are shattered and ninety percent of them would kill a normal human.  Broken spine, broken neck, smashed organs… etc.  They should be fatalities in all respects.

Mortal Kombat has always had some weird things like burning people alive, dragging someone across the screen with a bladed dagger and weapons live swords slicing through flesh with no repercussions outside of some lost health.

Allow me to reference the Playstation (one) era game called Bushido Blade.  It took the other extreme of fighting games.  For those of you unfamiliar, it was a realistic sword fighting game.  A clean hit to the body kills your character in one hit.  If your arm got hit, you couldn’t use it.  If your leg got stabbed you’d limp.

The problem with Bushido Blade was that it might as well have been a rock paper scissors game to ninety percent of the player base.

The thing about fighting games is that everything else about the system is well balanced and makes sense, built around two people having fun.  So how do we preserve the fun and the realism?  The Problem comes not from the bar denoting health, but more what it represents. 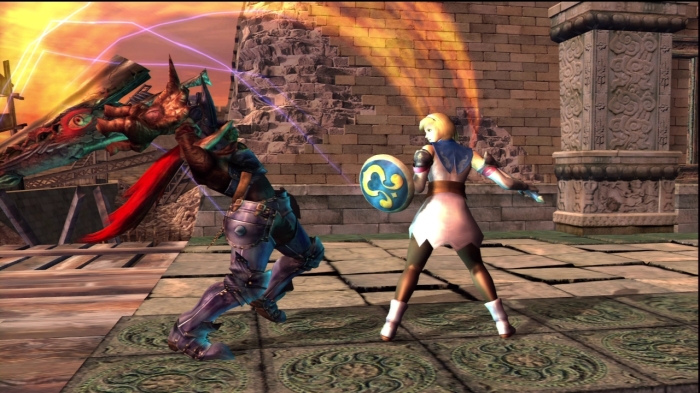 Yeah…. uh… not only is Cassandra dead if she doesn’t dodge this, she’s cut in half.

It makes a little more sense in Street Fighter.  I mean people can endure getting punched several times before they are rendered unconscious.  For the sake of argument, I want to talk about weapon fighting.

It is understood that in sword fighting everything is centered around the idea of scoring a killing strike.  But what happens before that decisive strike?  That’s right, defense.

The thing is, you can make a convincing replication of sword fighting by applying the concept of a health bar onto the very real concept of defense.  People do things to keep themselves from being killed by that dreaded decisive strike.  This is irrefutably accurate.  So the converted health bar could represent armor durability, the amount of energy someone has to dodge a strike or the mental focus required to parry.  To emulate the dynamic of an armed combatant, this could be automated (like a health bar) so instead of being ‘hit’ by an attack, clean strikes are ‘absorbed’ by this defense.

Once you run out of defense, the next clean hit kills you.  Makes sense right?

This is why it baffles me that games like Soul Calibur haven’t adopted this approach and if someone from Namco is reading this, feel free to steal the idea.   (I would like some credit at least, though.  I even have some ideas for a new franchise– hint hint!)

This is actually relevant to writing.  Finding ways to keep danger relevant without making your character feel invulnerable is a key factor in fantasy.  Keeping such consistencies will make your writing more immersive, I promise.

2 thoughts on “Musing: If I Made a Fighting Game / Suspending Disbelief”