I don’t usually put spoilers in my posts I’m warning you right now.  Do not read this post if you intend to play the game ‘Undertale’.  What is Undertale?  A roleplaying game that takes about 10-20 hours to complete to its full capacity.  I also have a sizable Star Wars: The Force Awakens spoiler in this post.  So if you haven’t seen it and you don’t want spoilers, don’t go on.

Now with the obligatory warning, let me go on with my tale.

Toreil scolds Asgore for his selfish actions and everyone gathers at the castle to offer their support.  Apparently I left such a strong impression with the denizens of the underground (this time) that they all came to appeal to Asgore to spare me.

With a little bit of digging and Papyrus’ blabber mouth, they heard it all through a little yellow flower. 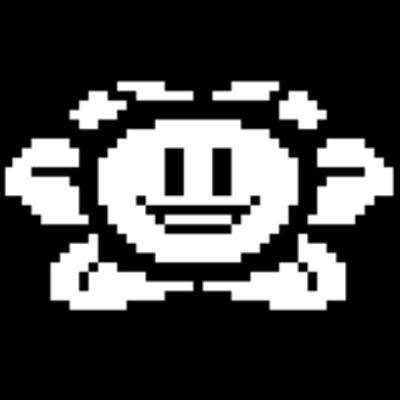 What a wonderful idea!

I warned you about spoilers, so this is where you’ll want to close the page if you plan to play Undertale without one of the more interesting twists being ruined.  And notice I put this extra warning past the whole ‘Flowey set us up’ bit.  This is no surprise.  If you can’t see Flowey as the big bad in this game, you really need a new pair of glasses.

Like Star Wars, there’s always a Sith Lord behind the ‘Darth of the Day’.  It just so happens I found the real ultimate evil in my first play-through.

So let’s get this over with.  Flowey captures all your gathered friends, with the intention of shattering the barrier between the underground and the human world.  Of course Flowey’s identity is an interesting little twist, but you won’t hear that detail from me.

After you beat Flowey back and reconcile with the misunderstood floral miscreant, (Cause I mean, come on, if you’re gonna be a goody-goody, go all out.)  he uses the last of his power to shatter the barrier so you and your new found monster friends can go out in the world.  You know, to clear up rampant misunderstandings between humans and monsters.

I felt pretty good about myself.  I promised everyone I’d vouch for the monsters to humanity and the final credits rolled.

Here’s where the shit goes down.  Excuse my French.

Remember at the end of the Genocide run?  You remember what I had to do to get the creepy smiling kid to restore the world?   What could I have done?  He hijacked my game!

I sold my soul.

It might have been my digital soul, but I sold it.  Why?  To redeem myself.

Problem is, when the final credits rolled and I had one screen between me and ‘the end’,  I saw this. 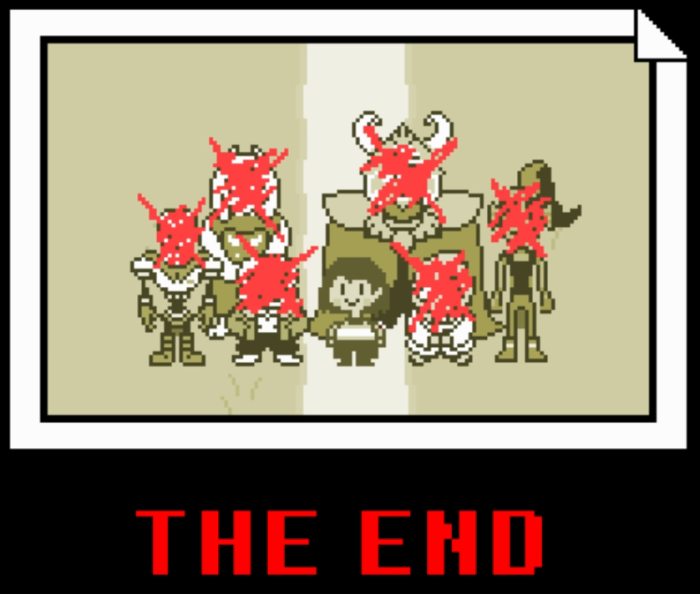 As a little bit of background: That smiling kid in the striped shirt is who you name when you start the game.  You learn through finishing the true pacifist ending, you actually were controlling a kid named ‘Frisk’.

The thing is when I succumbed to violence and got murdered by ‘Robin’, I (as Frisk) traded my soul for a second shot… but that’s exactly what Robin wanted.  The entire point of doing the second run (for me) was to redeem myself.  For Robin, it was a chance for a dead person to get a second chance at mayhem.

I don’t think I’ve ever been so affected by a game as I have by Undertale.  Weeks after I finished it, I still felt bad, like I’d let Papyrus and co. down.  Worse, the effects of the Genocide ended was ‘permanent’ in the same way you get to a tragic twist at the end of a novel.

To note Star Wars: The Force Awakens for a moment, think of the fate of Han Solo.  You have the right as a fan to stop watching at the end of Return of the Jedi.  You could paint the happy ending of Han and Leiah yourself.

Had I just played the ‘True Pacifist’ ending, I wouldn’t have even known about ‘Robin’s’ scheme.  It’s mentioned in the details between the ‘first human’ and Flowey, but even if I saw the doctored photo at the end of the story, I’d lack the context.

In my desperation, I even beat the game a second time just to pick the other option:  Staying with Toriel.  I figured maybe it would give me a chance to redeem…. 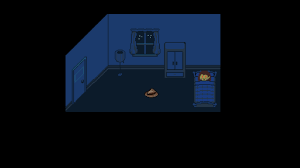 Long story short (too late) I’d love to write something that had half the emotional impact of the Genocide > Pacifist route of Undertale.  For the record, there is a means to clear the stain of Genocide, but I left it be.  I felt that using it would rob the game of the creative integrity it earned with me.

I decided I wasn’t above consequence.

Well, don’t say I didn’t warn you.  If you do decide to play Undertale, for those that read this without playing it, it’s still worth playing for the writing alone.  I even suggest playing it the way I did.   What I don’t suggest is playing the Pacifist Ending first then doing the Genocide path… in my eyes, that’s the one that makes you the worst kind of person.  You’d be willingly destroying your hard work and peace.

That would put some of the overarching themes in perspective, though.

Thanks for reading along with my Undertale adventure and the pseudo-hiatus of the blog to tell it.