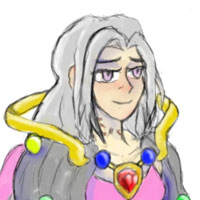 So since Sonnie is sort of a ‘frienemy’ now and the Lich Lord is a distant threat I decided on a new foe for Nell to butt heads with.  If you want to catch up on Ambrosia there’s a neat little place you can read (and even review) it,  Authonomy.com .  I’ve become a regular of sorts there, so feel free to take a look at Ambrosia and my Nanowrimo project from last year: Macro Corp. — Rise of Chaos.

New chapters for Ambrosia will premier here on Dimanagul.com but will soon after find their way over to Authonomy.  Make sure to take a look at the snazzy new cover given to me by a fellow writer on the site, Bradley Wind.  Out of respect to his business acumen, the cover stays on Authonomy.

Anyway, enjoy today’s little check in with Jamgled and Sonnie.

Jamgled downed another glass of whiskey.   Her fifth by her count, but Sonnie still had her by two.  He stared at the polished counter, keeping silent.

She spotted him in the sleepy bar a few blocks from the Gilded peanut and made a pest of herself.   With Nell still injured, she hadn’t had much to do.  No signs of undead and Okiir tasked her with looking over his wounded aces.

“Are you pouting?   You’re pouting.” Jamgled elbowed him.

“Denying it makes it that much more obvious you know.”

“Crawl back under the rock you came from.” Sonnie turned his glare to her.   “I’m thinking.”

“About Nell?   That’s why you’re getting piss drunk right?”

“No amount of booze could make appreciate woman as ugly as you.”

“Oh come on.” Jam tugged at her collar revealing the top of her breasts.   “You haven’t see the whole package. “

“I don’t care about your ugly face, or your body.   I’m talking about your ugly soul.  Your confidence is strong because nothing matters enough to wound it.” Sonnie said, pushing his empty glass towards the bartender.  “If you’re looking for sex, just ask.”

“You—”  Jamgled snorted in laughter.  “You really are an asshole.”

The double doors of the bar pushed open and a tall red haired man walked in.   He wore a red coat, high collared with decorative epaulets of shining gold.  The stranger walked with purpose, glancing around the bar and strode next to Sonnie.

Jam craned around to get a better look.   The man was slim with a regal build and set off the stench of self-importance.  She didn’t recognize him.

“Mr. Blaugrunder,” Sonnie said without turning to him.  “To what do I owe the honor?”

“I’m here for your uncle.   He and I have unfinished business and I caught word you were in town as well.   I thought we could find a mutual agreement.”

“My uncle, huh?” Sonnie smirked.   “You’re not his type.   He’s more of a tits and ass man.  Why don’t you hire a prostitute, you’d have better luck with that.”

Sonnie crushed his drink.  Splinters of glass exploded on the counter and all eyes turned to him.   He stood from the bench and stared down Mr. Blaugrunder.  “Say that again.   I dare you.”

“Is she with your uncle?”

Sonnie narrowed his eyes.  “Get out of here before I snap you in two, boy.”

Jamgled grinned.  Please say it again.  I want see this.

“Not happening.”  Blaugrunder shrugged, plucking a stone from his jacket pocket.  While no larger than a pebble it carried a glow bright enough to warm her face.   “I’ll ask again.   Where is your uncle?”

Sonnie turned his gaze to the stone and frowned.   Recognition came to his eyes and he backed up.  “You’re bluffing.”

“I never bluff.” Blaugrunder turned to Jam, smiling.  “Spirits.   You are an ugly one.   Mr. Daie has let his standards slide.

“I dunno, Red, my standards are pretty low.  Maybe he caught it from hanging around me.” She snatched away the stone and pinched it between thumb and forefinger.  “What’s this?”

“My name isn’t Red, it’s Brando,” he said, straightening his jacket.  “That, my simplistic little tramp is a relic powerful to cause an inescapable blast.

“When I will it to, yes.” Brando took it from her calmly.   “Did you know how much of the human is composed of water?   Should it freeze alongside the moisture in the air, it can surpass the destructive capabilities of flames.

“Hold on, you’re going to blow up the city?” Jam hid behind Sonnie.  “Don’t just sit there, Sonnie.   Punch him or something.”

“Cute.” Brando slid the stone. Into his jacket  “It wouldn’t make a difference.   You tell me where Eurydice Topel is and we won’t have a problem.”

“Gilded Peanut,” Sonnie said.  “It’s an inn down the street.   But Jamgled is going with you.”

Brando frowned over at Jam.  “Her?”

“Me?” Jam scoffed.  “But this guy is probably gay or something.  I mean look at them shoulders.”

“Savage.  These adorments are only given to magicians with mastery and understanding of all types.

“All types?   Including Dreamweaving?”

“Including Dreamweaving,” Brando said, smiling.  “How can I claim to be a High Wizard without being able to understand and defend against all magic?  This is why I need to talk to the High Sage, to expose him as the impostor that he is.”

“Fine, I’ll take you to him myself.”  Sonnie pushed past him, pausing to glare back at Brando.  “But one more thing.”

Sonnie straightened his coat, tension twitched in his shoulders.  “If I ever hear you call Nell a whore again, you will need more than magic to retrieve the stone from where I stick it.”

“Did I?’ Brando smirked.  “I recall speaking of a silver haired woman, but did not specify anyone in particular.   You may know her better than I do.”

Sonnie rounded on him, swinging a terrible right hook.   Brando raised a calm hand, halting Sonnie’s fist with a wall of ice.   Brando smiled, tittering his fingers mockingly through the wall.  A stone placed between his middle and ring finger crumbled to dust.   A man screamed, struggling in panic at Brando’s side.  He had been caught at the midpoint of the flash freeze in mid stride.

“Oh dear, look what you made me do.  He’ll have frost bite for hours thanks to your temper.”  Brando paced over to the victim and gave the man a consoling pat.  “There, there, I’ll have you out in a moment, don’t struggle or your vitals may shatter.”

Jamgled approached the wall, giving it a firm knock.  Rock solid and a half inch thick.

Brando traced a finger around the bystander.  In a flash of light, the ice shattered and fell away.  He eased the man to sit and the murmurs filled the bar.   The bartender hurried over to Brando, complaining nosily about the new dividing wall.

Jamgled inspected the gap, noting the clean edges.   She stepped through approaching Sonnie to give him a playful swat on the chest.  “You really love that girl don’t you?”

Sonnie nodded, frowning.  “I did what I had to, to make this chance possible.   But she doesn’t deserve someone that forces themselves on her.   I hurt her once and it made her stronger.  It’s respect that made me settle on this approach.   That and it’s in her best interest to keep far away from me.”

“That almost sounded sweet,” Jam said.  “Is that why you haven’t gone to see her?”

He nodded.  “She no longer needs what I can offer.   I was my job to give her a taste of power.   It’ll be up to my uncle to see she learns to control it.”

Jam donned a sly smile.  “So I assume it’s also your job to punch out twerps that call her a whore?”

“Yes.  Simply put, because Nell wouldn’t let such petty things affect her.   I, on the other hand—” He cracked his bloodied knuckles, glaring at Brando.  “—am a remarkably petty person.”